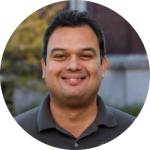 Abstract: Internet traffic encryption is rapidly increasing in the post-Snowden world. According to several estimates, more than half of the global Internet traffic is already encrypted. HTTPS deployment is accelerating, driven in large part by video content providers such as YouTube and Netflix. HTTP/2, for which major browser implementations use encryption by default, is also poised to increase the share of encrypted traffic on the Internet.

While encryption is good for privacy, it breaks deep-packet-inspection (DPI) based network management mechanisms that are currently used by network operators. In this talk, we will explore machine learning based alternatives to “learn” from encrypted traffic without breaking end-to-end encryption. We will start with a background of prior research on this topic, study how these techniques work while highlighting their technical challenges, and finally discuss future research directions.

Presenter: Zubair Shafiq is an Assistant Professor of Computer Science at the University of Iowa. He received his PhD in Computer Science from Michigan State University in 2014. He is a recipient of the Fitch-Beach Outstanding Graduate Research Award by Michigan State University and the Best Paper Award by the 20th IEEE International Conference on Network Protocols. His research focuses on data-driven aspects of networking, security, and privacy using a combination of empirical and analytical methods. For more information, visit https://www.cs.uiowa.edu/~mshafiq.