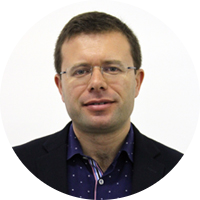 Abstract: This keynote addresses a hot and updated topic focusing on Internet of Things (IoT) and vehicular communications, mainly, on Vehicular Delay-Tolerant Networks (VDTNs). It starts with an introduction to IoT and its typical application scenarios. After, special attention will be given to the Inatel Smart Campus, an open Campus for research on IoT, experiments, and concepts and technology validation. Inatel has sponsored this project, started in August 2016, open for companies’ participation and promoting the academy-enterprise interaction. It is a true living lab for several IoT verticals, including smart cities and smart homes.

VDTNs assume asynchronous, bundle-oriented communication, and a store-carry-and-forward routing paradigm. These networks offer solutions for both rural and urban environments as well as disaster situations. In this Keynote speech, research methods and tools used to demonstrate, evaluate, and validate the proposed approaches are addressed. Special focus are given on modeling and simulation tools, and prototypes, including a laboratory prototype, called VDTN@Lab and a real prototype, created in cooperation with FIAT manufacturer, in Brazil..

Bio: Joel J.P.C. Rodrigues (joeljr@ieee.org) [S’01, M’06, SM’06] is a professor and senior researcher at the National Institute of Telecommunications (Inatel), Brazil and senior researcher at the Instituto de Telecomunicações, Portugal. He has been professor at the University of Beira Interior (UBI), Portugal and visiting professor at the University of Fortaleza (UNIFOR), Brazil. He received the Academic Title of Aggregated Professor in informatics engineeringfrom UBI, the Habilitation in computer science and engineering from the University of Haute Alsace, France, a PhD degree in informatics engineering and an MSc degree from the UBI, and a five-year BSc degree (licentiate) in informatics engineering from the University of Coimbra, Portugal. His main research interests include e-health, sensor networks and IoT, vehicular communications, and mobile and ubiquitous computing. Prof. Joel is the leader of NetGNA Research Group (http://netgna.it.ubi.pt), the President of the scientific council at ParkUrbis – Covilhã Science and Technology Park, the Past-Chair of the IEEE ComSoc Technical Committee on eHealth, the Past-chair of the IEEE ComSoc Technical Committee on Communications Software, Steering Committee member of the IEEE Life Sciences Technical Community and Publications co-Chair, and Member Representative of the IEEE Communications Society on the IEEE Biometrics Council. He is the editor-in-chief of the International Journal on E-Health and Medical Communications, the editor-in-chief of the Recent Advances on Communications and Networking Technology, the editor-in-chief of the Journal of Multimedia Information Systems, and editorial board member of several high-reputed journals. He has been general chair and TPC Chair of many international conferences, including IEEE ICC, GLOBECOM, and HEALTHCOM. He is a member of many international TPCs and participated in several international conferences organization. He has authored or coauthored over 500 papers in refereed international journals and conferences, 3 books, and 2 patents. He had been awarded several Outstanding Leadership and Outstanding Service Awards by IEEE Communications Society and several best papers awards. Prof. Rodrigues is a licensed professional engineer (as senior member), member of the Internet Society, an IARIA fellow, and a senior member ACM and IEEE. CV Lattes: http://lattes.cnpq.br/2907270080464933.